You are here:
Visitation 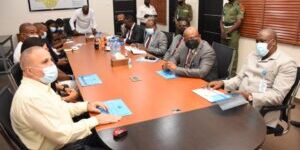 In a bid to further strengthen the relationship and collaborative research efforts between the Nigerian Army Resource Centre (NARC) Abuja and the newly established innovation hub centre, Innov8, the Director-General of the NARC, Major General GA Wahab (rtd), on Thursday led a delegation of the Centre’s management team to visit Innov8. The team was received by the General Manager of the hub, Mr Meir Dagan, who expressed delight with the visit. After that, the DG and his team were conducted around the Innov8 facilities, during which some of the senior staff explained the various areas and facilities visited.

Shortly after the facility, the team was further briefed by the General Manager, Mr Meir Dagan. In his remarks, he said they are ready to have a good working relationship with NARC in modern technology and creativity.

Mr Meir Dagan further states that Innov8 is ready to collaborate with NARC in the areas of research for capacity building, entrepreneurship programme, drone technology, E-cube Technology, upcycling training and creation, among others, adding that the centre was established mainly to identify problems and to provide solutions to such issues.

In his remarks, the leader of the team stated that he has heard so much about the Innov8 and deemed it necessary to visit to see areas of collaboration between the NARC and the hub because he believes that Innovation is the key and that he is also impressed with the kind of level of innovative skills and techniques he has seen.