You are here:
Collaborations 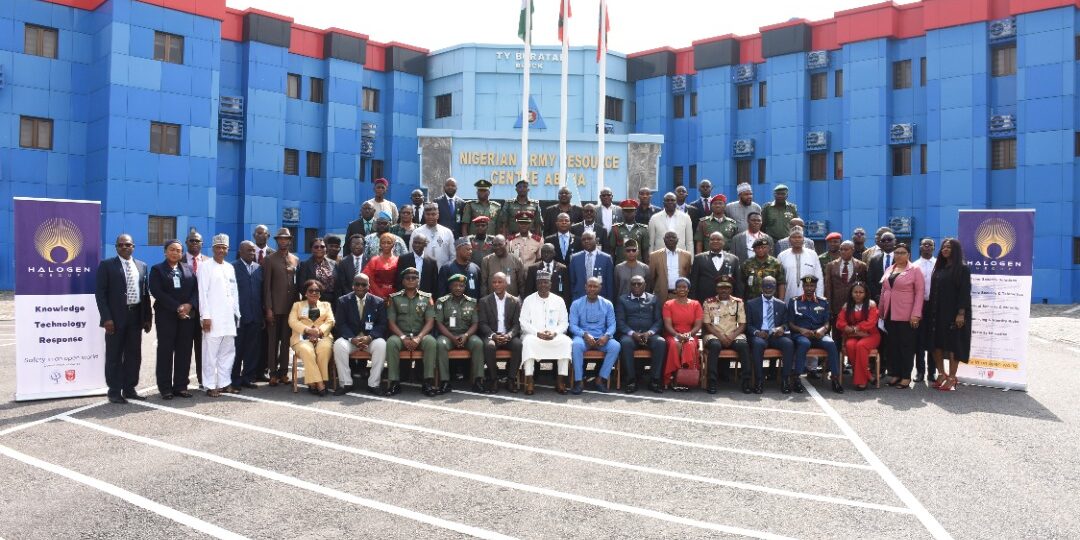 Some practitioners in the security sector have advocated intelligence sharing and collaboration among public and private security organisations to address the prevailing security challenges in the country They made this call on at the closing of the two-day Joint Public and Private Security Practitioner’s Roundtable organised by the Nigerian Army Resource Centre NARC in collaboration with Halogen Security Company Limited at Hall, TY Buratai Block, Nigerian Army Resource Centre (NARC) in Abuja.

The Director General (DG), NARC, Major General Garba Ayodeji Wahab in his closing remarks said, the impact of insecurity is being felt by every Nigerian irrespective of their status, class, creed and religion, hence, the need for all hands to be on deck. The DG said there is a need for all to acknowledge that the security challenges require all of the society approach in tackling it. He said that the roundtable was organised to interrogate the roles of the private sector in bridging the gap in intelligence gathering and sharing among the relevant players.

He said the objective of the engagement was to get everybody to work as a team to understand each other and identify the roles that they were to play. According to him, to get this to work better, we must work together because the solution to our problem lies with us and we must work as a team to be able to move on. “This is the first time we are coming together and it is after this that we will now look at what you do and determine what to do next to get everybody to work from the same table”, he said.

The Chief Operating Officer, Halogen Group, Dr Wale Adeagbo in his conclusions and findings during the roundabout said the existing gap within the nation’s current security system needed to be addressed towards solving the security problem. Adeagbo said that Nigeria had a huge resource with well over two million private security guards across the nation which it is yet to tap into. According to him, the nation has well over three million informal guards across the nation which when combined is three times the total number of every statutory officer we have in Nigeria. “Not only do we have these numbers, but there is a private guard, formal and informal in practically every street in Nigeria, so, what better way to solve and address security rather than engaging this resource that we have. So, the purpose of all this conversation really is how we can put a structure around this private resource and ensure that they become part and parcel of this solution of security in Nigeria, he said.

Adeagbo said, there was a need to have a nation where its capacity for securing itself was increased by bringing on board more individuals and agencies and organisations. He said there was a need to have a secure environment where there was a stronger collaboration across all the agencies to make efficiency and effectiveness much more achievable So we are all looking forward to that situation where this can be translated to real practice, he added. The participants for the roundtable were drawn from the military, paramilitary and private security organisations.