You are here:
Promotion 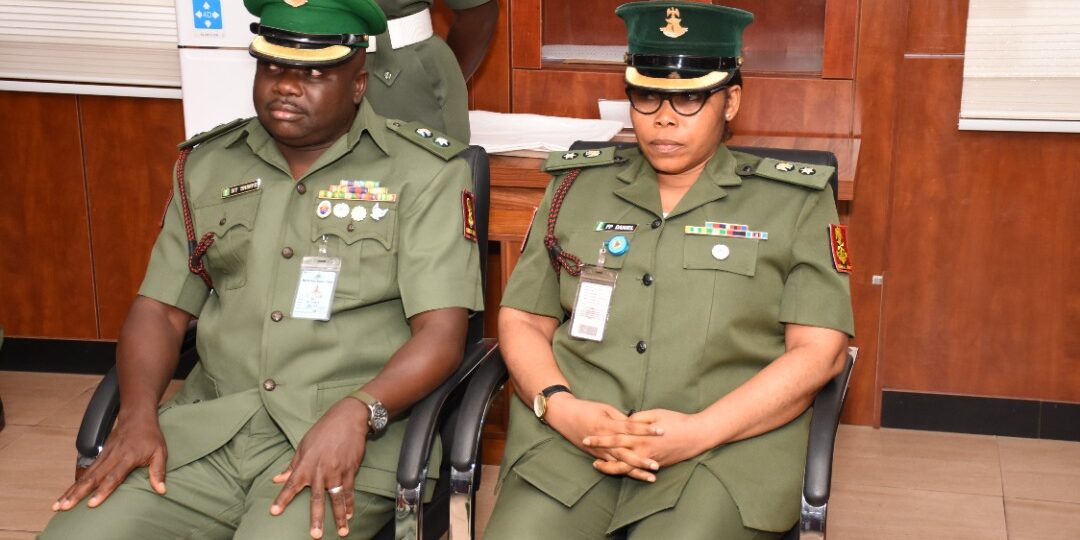 The Director General (DG), Nigerian Army Resource Centre (NARC), Major General Garba Ayodeji Wahab (Rtd) has decorated two senior officers of the NARC who were privileged to be among the beneficiaries of the recent promotion exercises conducted by the Nigerian Army and approved by the Army Council for the year 2022. The two beneficiaries promoted from the rank of Major to Lieutenant Colonel were Major Mbayang Shimfe and Major Felicia Peter Daniel.

In his remarks during the ceremony, the DG congratulated the senior officers for a well deserved promotion, adding that the promotion was a confirmation of their hardwork, loyalty, dedication and commitment to the Nigerian Army in achieving its constitutional mandate. He said, “You have been compensated for your hard work. You must continue to work hard.”

The DG enjoined the promoted senior officers to re-double their efforts as promotion comes with additional responsibility. He further urged them to ensure that the benefits that come with their new ranks are utilized to improve their families’ welfare.

While delivering the vote of thanks, Lieutenant Colonel Mbayang Shimfe on behalf of the newly promoted officer, thanked the Almighty God, the Army Council and the Chief of Army Staff, Lt General Faruk Yahaya, for finding them worthy to be promoted. He also expressed his gratitude to the Director General for his guidance, which helped them to attain the enviable position in their chosen career.

The ceremony was attended by senior officers both serving and retired, families, friends and invited guests, among others.

LENS VIEW ON THE COURTESY OF THE DEFENCE ADVISER TO THE HIGH COMMISSION OF INDIA IN NIGERIA, COLONEL SACHIN DUBEY, SM TO NIGERIAN ARMY RESOURCE CENTRE ON WEDNESDAY, 15 DECEMBER 2021
December 15, 2021